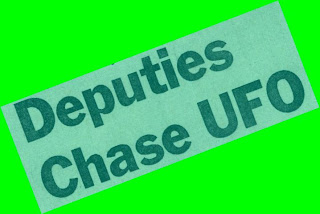 By 1966, the quality and abundance of UFO reports left a massive public impression, and reports submitted by law enforcement personnel all over the country added to public concern. Close encounters with lights or apparent objects in the sky no longer seemed a rarity, and ultimately Michigan Congressman (and later President) Gerald Ford demanded a congressional investigation after his own state was clobbered with nationally publicized UFO activity. The mid-sixties allowed newspapers from coast to coast to shine because, whether their UFO reporting reflected sobriety or humor, all the "good stuff" was out there in print, often on the front page, for an interested readership to judge, recorded in the archives for posterity.
Posted by Robert Barrow at 1:25 PM