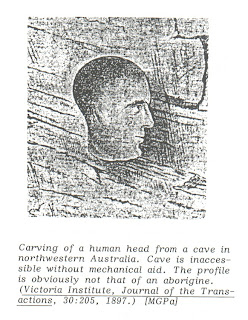 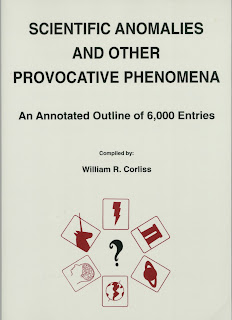 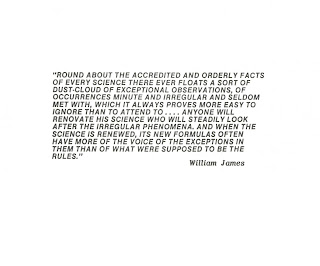 Primarily known for his Sourcebook Project since the early 1970s, and author of numerous science-based books and publications long before that, physicist William R. Corliss confronted the scientific community simply by throwing peer-documented ticking anomalies back in its face, accompanied by his own sensible commentary. With depth, detail and patience, Corliss' Sourcebook Project churned out book after book, each crammed with newly formatted reprints from, generally, older scientific journals. While Charles Fort was usually considered a journalist commenting upon strange and bizarre accounts often found in newspapers of his era -- topics which might force little more than a chuckle out of stuffy scientists intent upon dismissing things outside of their realm -- Corliss' approach involved digging up respectable literature regarding subjects that science can't exclude or run away from, such as human and animal enigmas, antiquities which (logically?) shouldn't be, planetary and celestial oddities and a wealth of other sticky brain-teasers and conundrums. His own philosophy was eloquently summed up via a quote from William James (see image) which appeared at the front of many of his books. The Australian human head illustration and caption shown appears in the volume whose cover appears here.

Sitting in the lobby of a federal government institution back in the eighties, I was thumbing through a stack of magazines when I noticed an old government-issued booklet about nuclear energy authored by Corliss in (I think) the fifties, but wasn't too surprised because I had already been purchasing and reading his Sourcebook Project volumes since the seventies. In fact, during the latter seventies and then the eighties, Bill Corliss kindly began sending along copies of his new releases which I frequently had the honor of reviewing for Pursuit, journal of the now long-departed Society for the Investigation of the Unexplained. During my years reviewing books, I wrote about Corliss' volumes more than any other author's works, and every one was a winner. Turning the tables a bit, Corliss eventually used a quote or two from my reviews in brochures advertising his new releases, and I felt humbled by his reference. Whenever he felt it necessary to send a brief note about something, usually written informally on a mere scrap of paper, each note was always signed simply "Bill," lacking any hint of self-importance or the arrogance that one might occasionally or even routinely expect from people of his scientific and editorial stature. For me, the charm of his commitment and honest nature merely reinforced the importance of his project.

Those aware of Corliss' immense contributions and reminders about what science was intended to be will miss his labors, and we hope family members or others with similar dedication will carry on the Sourcebook Project's ideals with pride.
Posted by Robert Barrow at 6:30 PM 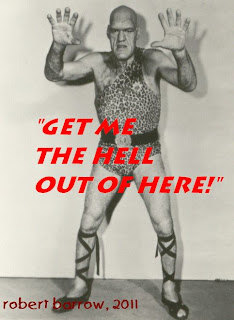 Readers, I'm taking a little time off this summer. I could say I'm doing so because I've nothing to say right now -- which is true -- but instead I'll lie and claim dire responsibilities or a sudden need to eat grass or something. Actually (love that word, it's almost as annoying now as "you know. . ."), there IS one thing that could return me to the blog in a hurry, and I fear it's a real possibility: That ABC-TV's lame summer series, "Primetime Nightline: Beyond Belief" might not resist tackling the UFO subject. Then, OF COURSE, I would be forced to write something horrible about it because, characteristically, commercial television's UFO "documentaries" suck. We all know the formula by now. They start out by mystifying us with interesting sightings, then lapse into Debunker Land so that everything we find enigmatic about UFOs is suddenly and conveniently explained away by dubious experts touting unlikely theories via the unscientific method. So PLEEZZZZZZE, ABC, concentrate on hyena ghosts or the face of Jesus appearing on sticks of chewing gum, but leave UFOs alone. No more UFO docu-moronics until you clean up your act.

Have a nice summer and be sure to come back, because I have so many exciting things to show you (okay, that's not. . .actually. . .true, but you never know. . .you know).

(Model in Photo: Not me, thank God)
Posted by Robert Barrow at 6:46 PM

I was more amused than bemused by an article in The Guardian (UK) of June 27, quoting a "top" Russian astronomer who claims alien civilizations will be discovered within 20 years. These scientific predictions always hold about as much substance for me as visions announced by street-side psychics and, besides, it kinda seems like intelligent somethings from somewhere else are already here, and both intellectually and scientifically they appear to place our best modern science in the realm of insect obedience school.

Nevertheless, the biggest eye-opener in the Guardian article was astronomer Andrei Finkelstein's insistence that "aliens would most likely resemble humans with two arms, two legs and a head." Yikes! After decades watching members of various scientific communities who assure us that no creature encountered in outer space could ever possibly look anything like us, that's quite the denouement for me. I mean, there's no way that premise would have worked in the original movie, "Alien," if, instead of a hideous creature biting and clawing its way out of somebody's chest cavity, it was just a human-looking fetus popping out and dropping onto the floor with a splat. In space, no one can hear you scream. Or laugh.

But, sounding rather like a S.E.T.I. fan, Finkelstein is convinced that his version of an alien hello-there moment is but a few years away because the "genesis of life is as inevitable as the formation of atoms." Will his aliens look like celebrities, perhaps resembling Brad Pitt, Roseanne Barr, James Earl Jones or Peter Facinelli?

Do we really need scientific consultation to believe we aren't alone in the universe? Good grief, if it's not the scientific community telling us what we already know through common sense, it's The Church putting in its own two cents Just In Case. Just. . .in. . .case.

Several years ago, I wrote letters to the editors of some newspapers, sometimes printed, informing them of my opinion that water exists on the moon, Mars and throughout the cosmos. My opinion cost the government nothing, NASA didn't pay me a cent and at no time did I attend a huffy international conference of bearded male or female scientists to set forth an elaborate theory. Shockingly, nor did I possess an advanced degree in celestial mechanics, unhelpfully saddled as I was with only a bachelor's degree in the non-sciences. Heck, no. I simply figured, well, water here, then water there. What's the mystery? If water exists here, it came from somewhere, some process. And I realized, too, that the stuff must be everywhere. How was I certain? I theorized that when my dog drinks water and then urinates, water still shows up in addition to urea and other substances of excretion. Obviously, you can't get rid of the stuff. Hey, superbly educated folks in our society make tons of money for far less basic reasoning, you know. And dogs are always willing to make themselves available to demonstrate C.E.S. (canine excretory science).

So water seems ubiquitous, and aliens with heads, arms and legs equal in number to ours are Out There, waiting to make contact. Ironic, wouldn't it be, if the first thing Finkelstein's version of aliens do after stopping by the moon to snack on a little Helium 3 is to land here and ask for a drink of water?
Posted by Robert Barrow at 1:46 PM