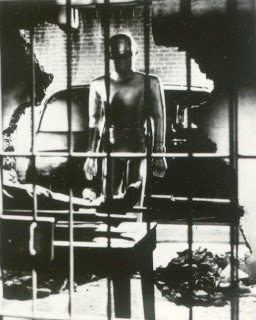 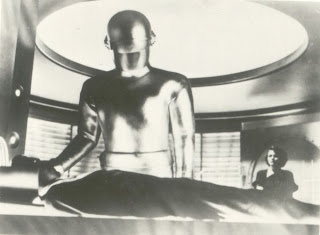 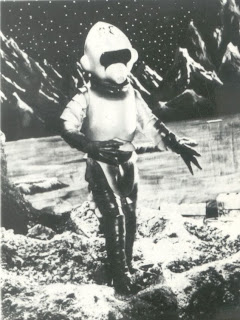 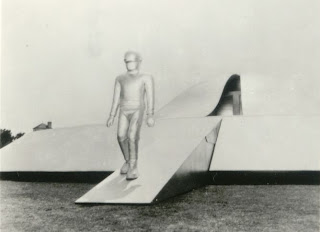 With these photos, we'll call an end to Halloween movie photo month, such as it turned out. Three from "The Day the Earth Stood Still" (1951) may be familiar to many of you. Unfortunately, the remake with Keanu Reeves was not impressive, and the digitalized Gort (the robot) looked like a fugitive from a cartoon junkyard. The fourth pic is allegedly from "Battle in Outer Space," a movie probably as bad as the photo indicates. I KNOW I've seen this film, probably on some commercial TV station which obtained it almost free of charge, but I can't really remember the details. Nor do I wish to. Likely something out of Japan way back, and if so I can only add, thank heavens for Godzilla, tested and true.
Posted by Robert Barrow at 3:56 PM 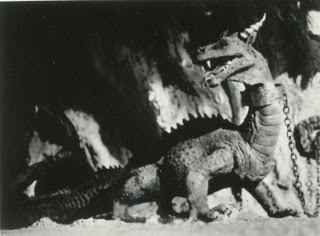 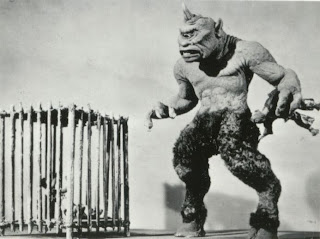 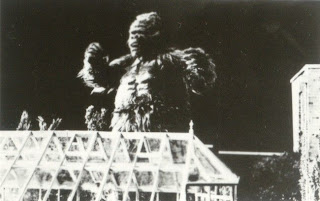 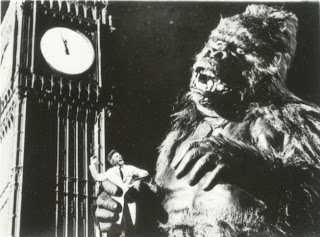 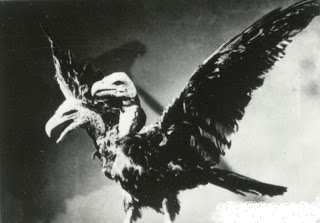 "The 7th Voyage of Sinbad" (1958) was shot in color and enjoyed the stop-action animation expertise of Ray Harryhausen, as he brought its menacing creatures (such as the Cyclops) to life. "Konga" (1961) starred the recently deceased character actor Michael Gough, whose ability to project reserved creepiness -- even as the perfect gentleman -- in many a horror and suspense movie kept him in demand. No matter his other accomplishments, I expect most will remember him for his "Batman" motion picture affiliation as Alfred the butler.
Posted by Robert Barrow at 3:51 PM 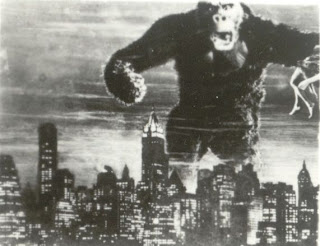 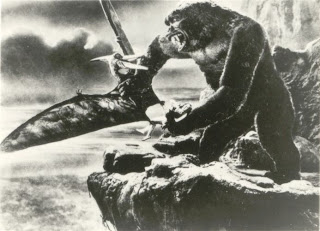 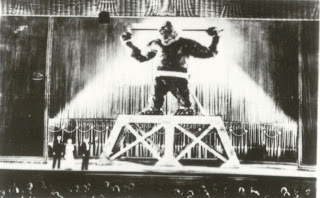 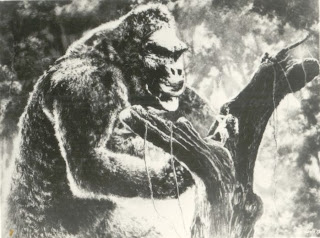 King Kong. The original from 1933 -- remember, in 1933 the stop-action maneuvers performed would make this almost equivalent to a manned flight to the moon among the thrilled theater audience, which had never seen anything quite like this before.
Posted by Robert Barrow at 3:45 PM

I wish to thank Robbie Graham, host of the excellent Web site, Silver Screen Saucers, for inviting me to write an article for him based upon some memories special to me regarding UFOs, science fiction movies and other things that influenced my interest in real UFO reports. Please click on the Silver Screen Saucers links below, and in the future consult the link list on the right -- and please do stay in touch with his site because he's always far ahead on upcoming movies about "saucers," extraterrestrials and the like.

And here's my article: 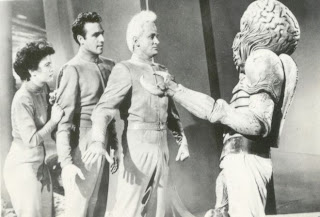 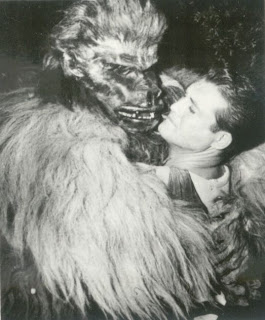 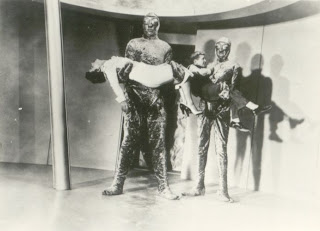 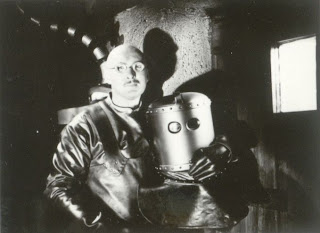 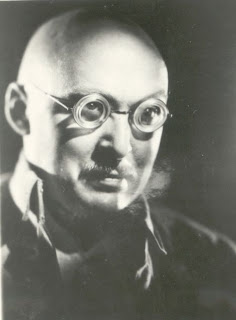 I don't "do" ghosts on this blog, but digging up movie spirits of an era gone by works for Halloween month. Today:

An obvious pose from the original "Invaders From Mars" (1953) makes the aliens look like pajama-clad lifeguards. From the 1950s TV series "Superman," George Reeves is either fighting or dancing with a gorilla-like creature.

"This Island Earth" (1955) was "2 1/2 years in the making," according to its famous publicity campaign. Shown are Faith Domergue, Rex Reason and Jeff Morrow with a "mutant" worker. It took me years to realize that Rex and Rhodes Reason (brothers) were two different people, as they seem so much alike. Jeff Morrow was a great actor and came to my little town one day to perform in a play about Abraham Lincoln.

1940 brought us the film, "Dr. Cyclops" starring Albert Dekker. Dekker gained even more fame in later years when he was discovered dead, hanging from a shower curtain and clad in women's undergarments. The circumstances were said to be mysterious. Hmm. Some of you will probably ask me, and I don't know, if young actor Thomas Dekker (of TV's "The Secret Circle" and "Terminator") is related to Albert. But I'll say this much -- if I were Thomas Dekker's agent, I'd invent a family relationship as soon as possible. You can't buy publicity like this for a career enhancement! It never hurts to have a "funny uncle" in the family tree, and since Thomas Dekker has already written, directed and starred in a movie entitled "Whore" and played Lance Loud in a production about the famous Loud family, whose lives were tracked and filmed for 1970s TV, he could only benefit from such additional publicity. Now I ask you, how would you know these things if I didn't use Halloween month to impart important thoughts of this nature?
Posted by Robert Barrow at 11:35 AM 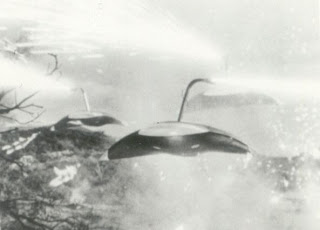 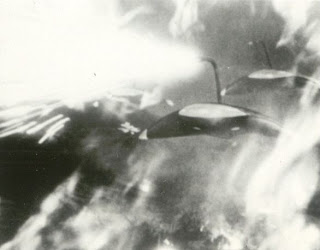 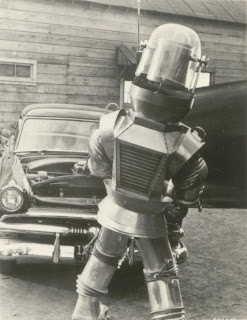 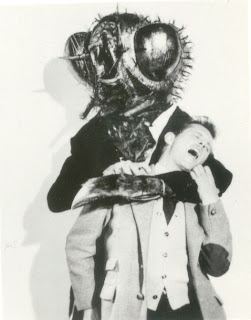 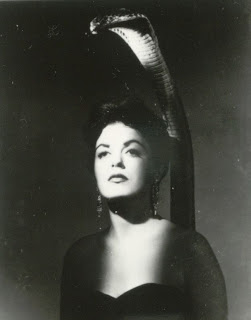 I continue to have upload problems, which means I can offer a few photos, but am unable to transfer text. This will be corrected, and indeed some of you should be darned glad I can't be wordy. I hoped to fill the month with old Halloween-appropriate photos, but at this rate I may lapse into November. Anyway, in the meantime here are a few more pics: Two are from the original "War of the Worlds" movie (dates are readily found as you place your cursor over each photo, or if you click on each). "Tobor the Great" (that's robot spelled backwards for those who can't stand the suspense of knowing why and what) makes like a can-opener when encountering an automobile occupied, we assume, by the enemy. A studio pose for "The Fly" is probably actually from "Return of the Fly," but I'm not sure, thanks to poor labels on my old photos. Finally, that's Faith Domergue (you may remember her from "This Island Earth") in "Cult of the Cobra." Isn't it great to know that most of you are likely too young to remember any of these? Well, that's our Halloween culture class for today. Don't forget the latest UFO news via the link list.
Posted by Robert Barrow at 2:23 PM 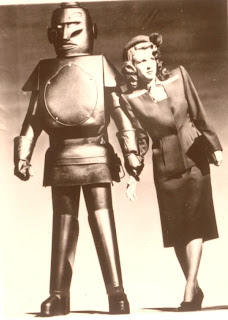 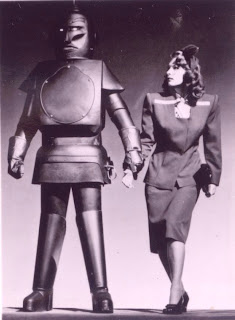 I continue to have uploading issues to be corrected as soon as a technical person addresses them. In the meantime, since I'm unable to communicate effectively here, I'll just add a couple of photos from -- I don't know -- maybe an old, old "Superman" movie or serialized program? These certainly aren't Dorothy and the Tin Man! The "great" thing about my old photos is that so many of them are labeled incorrectly -- so enjoy the Halloween season and embrace mystery scenes of the past!
Posted by Robert Barrow at 2:16 PM

Photos to Suit the Month 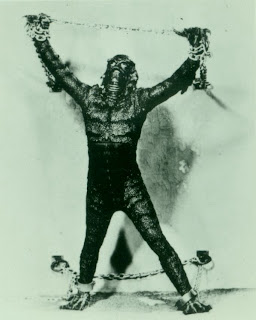 Some uploading problems are keeping me away from the blog at this time, but I did want to take the opportunity during this Halloween month to post old monster movie and actor photographs from my teenage-years collection (Why not? The world isn't exactly experiencing UFO fever right now. What can I say?). When technology decides to cooperate with me, soon I hope, I'll be back with you. You may recall that last year I spotlighted "The Creature From the Black Lagoon" and its sequels in photos. Here's one I left out -- obviously a studio promotion photo which looks suspiciously like a man in a rubber monster suit. (Oh, wait, it WAS a man in a rubber monster suit. . .Ricou Browning as I recall). I added a little color tinting for, um, dramatic effect.
Posted by Robert Barrow at 1:11 PM