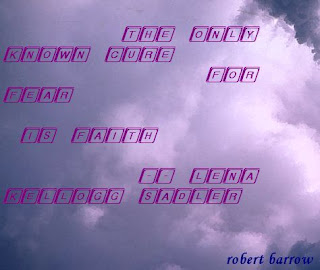 The good news is that UFOs weren't enlisted as the culprits intent upon harvesting The Chosen over the weekend. However, yep, even a broken watch gives us the correct time twice a day, but whether 6:00 p.m. or 6:00 a.m. last Saturday, there was no miraculous mass-ascension of souls at the supposedly appointed hour. My initial assumption regarding this sad state of affairs was that folks are just too darned fat now, and if it's becoming standard for overweight people to require two airline seats, how in the world can we expect them to be lifted up by a god of their choice? I doubt that even souls have escaped the weight problem.

But relax. Scientist Dr. Stephen Hawking says we're afraid of the dark and find comfort in religion, even though when the brain's "hard drive" goes south that will be that. No souls for Hawking, obviously. I wonder if he ever questions whether crows have a higher caw-ing?

I've always been suspicious of the pearls of wisdom we think God imparted, but that's primarily because His words passed from human to human, and we humans have a remarkable penchant for mixing truth with fiction, for writing accounts tailored to one's personal liking, and for hearing things in conversation never actually said. It's kinda like those TV commercials for sexual performance enhancement pills -- every time I saw them I was certain the drug pushers were referencing "a reptile dysfunction," and I simply couldn't understand what medical mysteries had befallen national lizards, and why their condition urgently necessitated magic perk-up pills. But then I figured out what was really being said, and realized that reptiles had nothing whatsoever to do with this silly human invention designed to prolong human fantasies prior to giving up the ghost, as it were, and ascending to That Place where so many souls were supposed to go last Saturday, except Judgement Day apparently went as limp and flaccid as a . . .well, it didn't happen.

On a similar note, I'm not at all sure The Faithful of the world had it right last weekend. Maybe religious historians called the wrong play, falsely interpreting ancient writings to warn of people being lifted up by The Rapture, when the real words warned that The Faithful would actually be carried away by The Raptors and eaten.

It's like that Osama bin Laden thing. He may well have gone on to enjoy 72 virgins after taking that final ocean dive with his freshly-ventilated head, but I have a pretty good feeling that all the afterlife virgins of his twisted faith are old male virgins. Joke's on you, dude.
Posted by Robert Barrow at 10:55 AM

APRO and the Meier Book 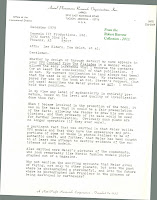 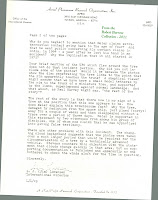 In September of 1979 Jim Lorenzen, international director of the Aerial Phenomena Research Organization (APRO) dispatched a letter to the general APRO membership announcing the publication of a new book entitled UFO Contact From the Pleiades, published by Genesis III Productions, Ltd. This would be a handsome volume, the first in a series of books featuring UFO photos from the Billy Meier collection, and APRO had "just concluded exclusive arrangements" with Genesis III to bring the book to membership attention. The publisher's brochure regarding the book was enclosed with each letter.

While admitting the book was "sure to be controversial," this was not one of APRO's finer moments, because accompanying and preliminary praise about the book's potential just seemed out of character for APRO's generally cautious attitude.

However, two months later Jim Lorenzen issued yet another mailing to members (shown here), this time the copy of a letter he sent off to Genesis III Productions, denouncing an inference within the book that he endorsed the contents. Lorenzen clearly indicated that he was mislead about the subject, and offered evidence which went far to cloud the Meier story.

In the years since, "Meier-ers" have continued to support Billy Meier, while a wealth of evidence appears to indicate things far removed from truth. Having purchased an initial copy of UFO Contact From the Pleiades myself, I reserve the right to say categorically that I believe the Meier photos are fakes and that his story is nonsense.

I paid a bunch for that book, and someday when I find somebody really gullible, rich and willing to part with tons of cash for this (low) numbered "collector's edition," I shamelessly intend to take 'em for every dollar I can get. There's one born every minute, you know.
Posted by Robert Barrow at 2:32 PM 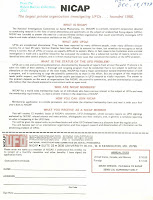 So far, I've not found any other NICAP last-gasp reminders, but this membership application -- progressing at last from drab black and white to at least a hint of attention-getting color -- arrived in December of 1973. Despite a few worthwhile publications issued from time to time in addition to NICAP's UFO Investigator, it was all downhill from there. Eventually, Dr. J. Allen Hynek's Center for UFO Studies purchased NICAP's voluminous files (the complete series of the UFO Investigator are available on compact disc via the Center, see link) for a tidy sum as NICAP disintegrated, so at least these documents found a good home. In the real world, however, funding, time and temporary storage space always loom as potential annihilators of one's best intentions.

Be sure to visit the nicap.org site for much more about NICAP and some of the best UFO evidence ever documented.
Posted by Robert Barrow at 1:31 PM

Fouling the Ocean with Demon Blood 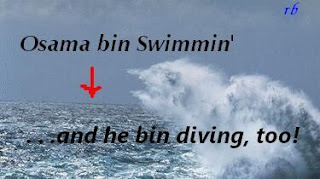 First of all, thank you big time to the U.S. military, the best and, unfortunately, too often most unappreciated military force in this screwed-up world.

Second, if you folks were instructed from higher-ups (WAY higher up, that is) to give this monster a proper burial at sea, whilst you stood aboard ship gnashing your teeth over providing pleasantries to the bastard, that alone seems the worst part of the operation.

This pathetic throwback from centuries past deserved nothing more than one of those beheading festivals he so cherished.

At the very least, how comforting it would be to find out that the person who administered the fatal head shot was a woman, with Osama hearing his last words (translated, of course) ever: "I got'cher burka right here, little man."

One more thug gone, so many more to take his place. . .
Posted by Robert Barrow at 1:12 PM 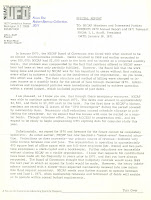 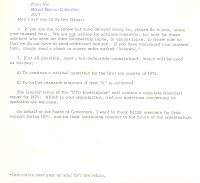 Echoes of the ousted Major Keyhoe's previous pleas for monetary contributions resounded as 1971 kicked in, even though NICAP had undergone many changes, including a change of address on Connecticut Avenue. By then, John L. Acuff was NICAP's president and G. Stuart Nixon remained secretary-treasurer.

This January 18, 1971 "Special Report" drips with semi-assurances that NICAP's status will be maintained with the satisfaction of indebtedness, and offers hope for the future. But, again, as Richard Hall's recollections (nicap.org) indicated, NICAP's position, both economically and operationally, reflected other troubling issues, and in the end apathy and, allegedly, an overriding quest for something of personal profit in a nonprofit organization caused an inevitable demise. The UFO issue, to put it bluntly, became subservient to administrative whim.

Yet, for a few more years NICAP limped on and on before a rather uneventful death. Next time, we'll feature one of the organization's last gasps.
Posted by Robert Barrow at 12:59 PM