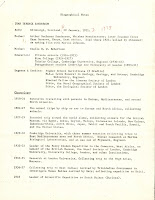 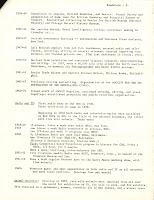 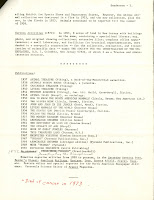 I never met Ivan Sanderson, but was a member of the organization he founded in the sixties, the Society for the Investigation of the Unexplained (SITU). For some reason, probably in the early seventies, I received a three-page bio about him, and it probably came directly from SITU. I made a brief note regarding his death in 1973.
There's so much to say about Ivan, his prolific writing and extraordinary life, and even a lengthy bio can only hint at the things he saw and events he explored. Even in death, however, he remains a rather controversial figure in terms of sorting out some of the truth and fiction about his life. For those familiar with his work and for those who wish to become so, I'll post the bio today. Otherwise, I fear that scans of this specific document may remain unavailable on the Web.
Posted by Robert Barrow at 1:37 PM

Redundancy on the Edge

In a grand attempt to rush information and visuals to my "U.F.O." movie blog (ufothemovie.blogspot.com), I've finally caught up. While the last several entries concentrated on promotional material, I do want to remind new readers that a proper understanding of this 1956 motion picture's importance will best be appreciated by reading chronologically from the start -- and be sure to check out the links, particularly the oral interviews available at the Project 1947 site (Al Chop and Capt. Willis Sperry).
Unless something further turns up, I've included all the visuals in my small collection for now -- and, again, I hasten to add that a lot of rare photos were "lost on the mail" (not in my opinion, however) in the seventies when I sent an article to Saga Magazine's UFO Report.
With everything on display, my remaining option is to provide some analysis regarding changes in the script, from inception to production. The 1954 script underwent significant alterations by the time "U.F.O." reached theater screens in 1956, and as time permits I'll attempt to comment. In the meantime, I only hope that this small tribute to the movie and the former military and government people "who lived the story of the UFO" is worthwhile historically and of interest to the readers.
Posted by Robert Barrow at 3:43 PM 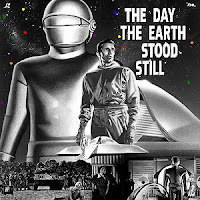 I've wondered for years why the fifties movie,"The Day the Earth Stood Still" wasn't remade. After all, it was popular, came in handy to sooth and/or frighten a post-war world, and then there are the obvious and confirmed biblical relationships. And frankly, if you're ever to stand face-to-face with an alien, the tall Michael Rennie sort seemed a good choice over a four-foot gray entity who prefers the cold and clinical approach to conversations enjoyed in perfect English.

But, finally, the remake is on, due for release in December. Keanu Reeves in the lead role? Maybe he'll blow us away. I'm curious about how Gort will be portrayed. What will the ship look like inside? Will the obligatory child actor be annoying and able only to say things like "wow" and "gosh" every time he speaks? Will there be a plot twist this time where the phrase, "Gort, Klaatu Barada Nikto" actually means "Gort, Klaatu commands you to bite off every human head on the planet?"

I hope the movie turns out well and faithful to the original story and/or the 1951 motion picture, for I'm not crazy about Hollywood turning out another film about warm and fuzzy aliens and their robots, (and we have heard things about this new version -- Klaatu and Gort may be a couple of the harshest, no-nonsense dudes ever to traverse space fiction).

I bring this up only because I harken back to a phone conversation with the late Coral Lorenzen when the film, "E.T." came out, and how outraged she was that aliens were portrayed as kind and benign toward us -- because the real UFO evidence and terror involved with alleged abductions indicate quite another story. Maybe 2008's "The Day the Earth Stood Still" will reinforce the caution that encountering those things of alien identity isn't necessarily akin to winning the lottery. Experience the fictional alien. . . but absolutely beware the allegedly real one.
Posted by Robert Barrow at 6:05 PM