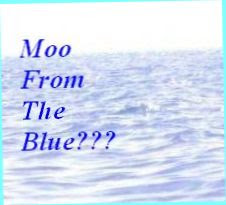 (By coincidence, just after I wrote this week's entry, below, the national media began reporting on charges of alleged cruelty discovered at large corporate dairy "farms." Once there were many small family dairy farms, places where the animals were so few in number that farmers could name each cow individually, and all were treated with kindness. By contrast, a disturbing number of corporate mega-farms so prevalent today, whose existence frequently depended upon buying out small family farms unable to stay in business, seem intent upon profits first and the animals' welfare second, or third, if at all. May I take this opportunity -- again -- to say bigger is not necessarily better. The word, growth, applies equally to the business world and cancer, and when each gets out of control the result can be horrific -- as it obviously has become because of the impersonality and cruelty associated with the practice of mega-farming. Cows, poultry and other critters often live in terrible conditions and it seems to be getting harder to produce farm products not contaminated with killer bacteria at some point in the complex network chain. Could be we really do reap what we sow.)

This seems ridiculous, yet it's been in my thoughts for years. Nobody likes to be, uh, "cowed," but this one calls for wild speculation:
In the 1980s many newspapers carried a syndicated column (via Chronicle Features) entitled "Earthweek: A Diary of the Planet," compiled by Steve Newman. A map highlighted global locations of interesting scientific events or findings of the day, and, to the delight of inquiring minds, Mr. Newman never failed to include the occasionally intriguing international UFO report. And there was some just down-home weird stuff, too, quirky little tidbits beckoning us to a place or incident both absurd and dark. So, I was more than a little curious and disturbed by "Earthweek" of September 11, 1989 when I read a paragraph entitled "Sunken Cow."
Newman culled a fair number of stories from various science news services, and this particular account described two people in a small submarine, involved in counting fish off Alaska's Baranof Island. While submerged to a depth of 690 feet beneath the surface, Tory O'Connell, a biologist with Alaska's Dept. of Fish and Game, and her pilot suddenly encountered for several seconds a dead cow resting on the ocean floor.
A videotape viewed by a reporter for The Sitka Sentinel documented this bizarre sight, confirming that the object did indeed seem to be a Holstein cow. The carcass's condition indicated that it hadn't been at the site very long, and ocean researchers (wisely!) declined to offer theories about the cow's guest appearance in Davy Jones' locker.
What to think? Obviously, this wasn't the cow that jumped over the moon. Or was it? If one accepts the high strangeness of cattle mutilations, including researchers' caveats that some animals appear to have been dropped from great heights -- leaving deep depressions in the ground -- almost anything goes. Whether any specific body parts were missing, of course, was not addressed.
One could also speculate upon the innocent passage of an ocean vessel crammed with cattle, a voyage troubled by The One That Got Away, but the implications of a cow abducted by otherworldly high-tech cattle rustlers of the night -- perhaps extraterrestrial morons who forgot that fish live in water, but even dead cows belong back on solid ground -- must be entertained. Or maybe somebody or something thought it best to conceal a horrible experiment far away from prying eyes.
Or. . . maybe the wretched creature, taking a rest from chewing grass in some far-off land, had a momentary creative or artistic spark, sprinted off at bovine speed and really did try to jump over the moon. Looks like the poor old girl almost made it, too, but for gravity.
Posted by Robert Barrow at 2:06 PM 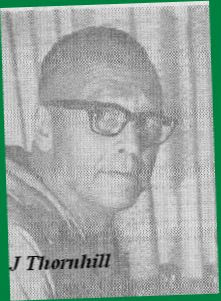 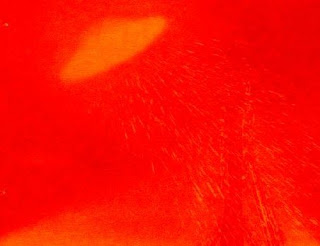 Jumpin' wombats, you let one (more) Islamic terrorist on a plane, next thing you know he sets his undies on fire and look what happens? The passengers, the crew, the nation, the whole world goes bonkers!
That's understandable. Personally, I wouldn't mind if flight attendants stashed lethal injection hypodermics somewhere between the peanuts and soft drinks to, where necessary, "calm" ruthless murderers, but what I don't get is the lack of firm official response anytime the airborne threat to aviation involves UFOs and not terrorists.
UFO history bleeds with airline/UFO encounters, and every one, no matter the drama, ends up hastily ignored or explained away by government or airline officials. They just want it all to go away, and that is so curious, so foolish, so dangerous. My question is, when passengers literally get thrown out of their seats because pilots have to engage in emergency maneuvers to avoid possible collision with strange lights or objects in the sky, why aren't these accounts as publicly important and urgent as terrorist actions?
Researcher Wendy Connors catalogued in her extensive Faded Discs audio collection a fair number of "Long John Nebel" radio shows From NY City of the 1950s. One classic program featured discussion of a fifties airline/UFO encounter, demonstrating an impressive instance of a cover-up, and I had mentioned this particular audio segment while reviewing one of her (now unavailable) compilations for the UFO Updates Web site (see link) a few years ago.
This was a Pan American Airlines flight from New York to Puerto Rico, and window passenger Jay Glick related to Nebel and his audience that it was around 3:15 a.m. when he suddenly witnessed "a solid-looking, luminous, large object with a greenish core to it, very bright, very large, moving at a fantastic speed...it looked as though it was going to hit the plane exactly." Accompanying the strange sight was a "tremendous roaring noise."
Glick believed the pilot noticed the object, too, because the airplane was thrown into a sharp ascent, causing sleepy passengers to be thrust from their seats as a collision appeared imminent.
To Glick's further amazement, the UFO also ascended, leveled off, reversed course and disappeared into the darkness. Nearly all passengers witnessed the episode, he affirmed, and some were actually hospitalized for hysteria and minor injuries after landing.
Nevertheless, about an hour after landing, airline officials speaking with firm resolve insisted to passengers that the airline regretted this "meteor" incident. When some passengers protested and asked how anybody could possibly believe this was simply a meteor, officials merely repeated the same words. I don't know the extent of Glick's involvement in determination of the story behind the story, but he further related on the Nebel show that seven other airline pilots also saw the object, and all were in agreement about its strange nature as each radioed reports to the San Juan airport.
All terror events are equal, but some terror events are more equal than others, George O?
Terrorists do things to the airline industry and UFOs do things to the airline industry. Why is one more important than the other? If UFOs messed around with young private Aussie pilot Frederick Valentich, who was never seen again, why didn't that "terrorist" headline intrigue the press as much? Oh, right, the unseen. Commercial airliners? Okay, read up on the Capt. Killian case, and don't forget the Capt. Raymond Ryan case, where Ryan and his copilot were instructed by federal government officials to break off from their Albany-to-Syracuse, NY flight and chase a UFO (all against the rules, the government denied it -- passengers held dangerously hostage by U.S. officials, you see, as private aviation was instructed to play what should only be military maneuvers -- but Ryan admitted it all on a TV talk show in the fifties before the truth was silenced).
What does a UFO have to do before receiving the official and widespread public attention awarded a terrorist cell -- maybe, say, hover over a runway at O'Hare International Airport during daylight, putting approaching and departing airliners in danger before escaping vertically through a self-made hole in the clouds? (Oh, right, November 7, 2006. . .)
Posted by Robert Barrow at 12:26 PM