The Score: Military Out, UFOs Still In 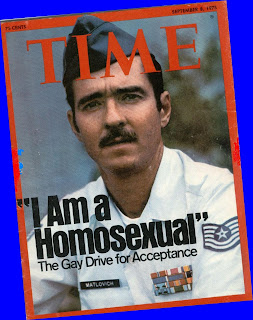 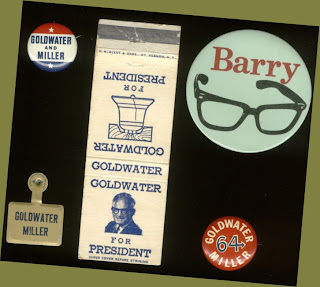 Jake sat on the porch next to Uncle Bubba and Aunt Florence, each sipping a mint julep on this hot August night in the early seventies. Bubba still wore the hood from his Klan outfit, too tired and far too proud to remove it after a particularly grueling rally in the woods. He only lifted it far enough to drink. "Don't that jes' beat all?" Bubba asked the stars above. "The govamint don't let us go after the coloreds no more, can't even mess with the Jews! But I'll tell ya one thing I know for sure," continued Bubba, now looking Jake straight in the eye. "We still got to deal with the ho-mo-sexurals! The govamint ain't never, never gonna care about them abomina-shuns! I'm tellin' ya true, if the day ever comes when they lets fags and queers serve in the Army or Navy, hell, that'll be the day the govamint finally fesses up with the truth about flying saucers! Ain't gonna happen!" Jake finished his drink, shook his head and excused himself because he was leaving the small town and heading for Atlanta, where the variety of bars and recreational establishments he preferred to the local redneck hangouts would horrify Uncle Bubba. Jake wanted one more wild weekend in the city, his secret safe from all but his distant contacts, before his pending military enlistment based on a lie. . .


As even Uncle Bubba would know by now, the times they have a-changed, and what should have never been an issue in the U.S. military has been settled at last. A young person wishing to serve his or her country with the necessary talents can now sign up without that timeworn interrogation regarding the position of one's sexual orientation on life's precarious compass. Unfortunately, the government hasn't much to say about that OTHER truth.

It's times like this when I miss the heck out of the late Arizona Senator (and USAF general) Barry Goldwater. Not only did he speak out openly about the government hiding UFO information -- he also chided officials for condoning a ridiculous ban on gays in the Armed Forces.

Time Magazine. . .September 8, 1975. . .the cover that shocked America (pictured). Air Force Technical Sgt. Leonard Matlovich dared to confess The Big Forbidden, in uniform yet, at his own peril, as he fought officials in 1975 for the right to serve. Matlovich, a 12-year Air Force veteran awarded both the Bronze Star and a Purple Heart for combat heroics involving three tours of duty in Vietnam, couldn't perform the desperate heroics needed to save his own career bacon once the military found out he was gay. There were lawsuits as Matlovich and the government fought one other, and in the end the airman, discharged against his will, won $160,000 from the feds in exchange for promising not to attempt readmission into the USAF.

The seventies even brought the country a TV movie about Matlovich's struggles, and after he died in the summer of 1988 from AIDS he was buried with full honors at Congressional Cemetery in Washington. Upon Matlovich's tombstone are two pink triangles, memorializing symbols the Nazis used during World War II to designate homosexuals (and since adopted by gay rights advocates). Underneath is the inscription Matlovich wrote himself for inclusion on the stone after his death:

A Gay Vietnam Veteran:
When I was in the military they gave me a medal for killing two men
and a discharge for loving one.

To those who remember the Matlovich controversy, his self-epitaph might seem the end of the story, but for me the more interesting part is his burial site, located not 20 yards away from the final resting place of both former FBI director J. Edgar Hoover and his long-time associate Clyde Tolson -- alleged and assumed now to be part and parcel of the most famous closeted gay relationship ever known between two men in the upper echelons of U.S. government.

(For readers uninspired by today's subject matter, we note that Hoover also apparently maintained quite an interest in "flying saucer" reports known to the FBI. You may already have seen the trailer for a motion picture about Hoover's life starring Leonardo DeCaprio, directed by Clint Eastwood, set for release in November, and it will almost certainly deal with Hoover's sexual side, but not his UFO curiosity, automatically destined to merit zero attention. When it comes to "dramatic license" influencing caricature-like Hollywood motion picture "bio-pics," any emphasis upon a prominent person's UFO interest is truly equivalent to the proverbial fart in a crowded room. To put it delicately.)
Posted by Robert Barrow at 2:35 PM 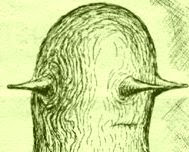 Charlie Hickson has died, and Pascagoula will likely never again receive the sort of fame infused by his story. His was the account to make us say, hmm, maybe Charles Fort was right -- maybe we are "property."

The evening -- that unique evening -- was growing later and darker on that strange night in October of 1973. Charles Hickson and Calvin Parker, having been brought to the sheriff's office, began telling their bizarre story of alien abduction, an encounter that transformed their hopes for a few tranquil hours of fishing on the banks of the Pascagoula River in Mississippi to clock-stopping moments of horror. Hickson did his best to remain rational as he recounted, frankly, details of an unbelievable incident. Parker, however, was simply hysterical, apparently affected emotionally by something terrifying, a seemingly illogical confrontation with some nameless fear.

Nor did a tape recording (the audio, several minutes in length, may still be available on the Internet at no charge) made in secret after the sheriff left the two alone for a few minutes help to dispel their incredible account, for their apprehension and confusion remained alarmingly intact, with no vocal evidence of a hoax. Ultimately, even Dr. J. Allen Hynek would be impressed with the fishermen's harrowing story.

Another 28 years would go by before journalist Natalie Chambers wrote an astonishing update, distributed via the Associated Press, on October 21, 2001. It seems that Hickson and Parker had witnesses that night so long ago -- a car full of Navy servicemen who may have seen a peculiar airliner-size craft glide and descend into the fishing area.

Chambers' article should have shocked the world out of its negative complacency toward the UFO abduction issue -- and maybe it would have, had the country and the world not been consumed with other terrors, those of a very human nature, just weeks before.

During the years following the Pascagoula incident, Charlie Hickson never tired of relating the pair's story, and even made a few bucks speaking and writing about it. Calvin Parker, on the other hand, reportedly remained devastated, wanted nothing to do with publicity and left the area, taking unfathomable memories of the abduction incident with him. These are the kind of people to whom one wishes to express profound sympathy -- but then we pause, oblivious to knowing what to say, or what to do. We cannot relate. Relate to what?

Several articles relevant to the Pascagoula incident are posted at nicap.org (use their on-site search engine) and my December 1, 2008 blog entry about the incident -- an important entry for me -- is entitled, "The Extraordinary Witness" and may be accessed on this blog at: http://robert-barrow.blogspot.com/2008/12/extraordinary-witness.html

(Pictured: Charles Hickson and an artist's conception of one of the creatures encountered by the men.)
Posted by Robert Barrow at 1:36 PM 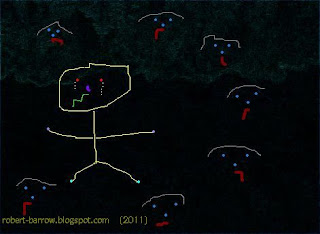 Thought for the day: A news story from Reuters (London, September 4) appears to hanker for a UFOlogical mini-observation.

Seems that "Europeans are plagued by mental and neurological illnesses,
with almost 165 million people or 38 percent of the population suffering each
year from a brain disorder such as depression, anxiety, insomnia or dementia,
according to a large new study.

"With only about a third of cases receiving the therapy or medication needed,
mental illnesses cause a huge economic and social burden -- measured in the
hundreds of billions of euros -- as sufferers become too unwell to work and
personal relationships break down."

Further, the study warns that mental disorders are Europe's biggest health challenge of the century.

Think of all the occasions, current and past, where witnesses to UFO incidents and alleged abduction phenomena are confirmed to be mentally intact and, indeed, of the solid citizen variety with stable lives.

As depression and other mental problems increase globally for any variety of reasons, one might ask whether eventually the only emotionally fit people remaining on the planet will be those who encountered UFOs during their lifetime. Imagine -- those whom the debunkers and skeptics called crazy for decades might turn out to be the only sane population left.

Good thing, too, because somebody has to stick around to turn the lights out one day.
Posted by Robert Barrow at 10:52 AM

About Those Who Compose the Write Stuff with the Right Stuff 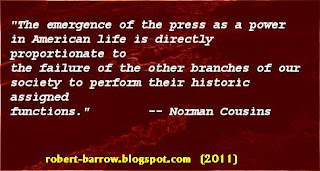 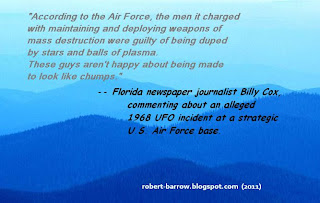 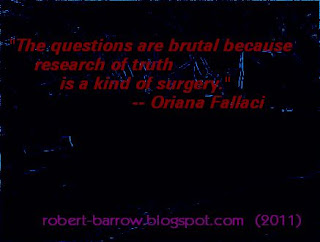 Occasionally it happens. Editors and journalists actually join hands and tell their reading, viewing or listening audience the truth: That their UFO reporting, frankly, sucks in 3-D.

Yes, fortunately we have credible UFO news gatherers and commentators such as Billy Cox, George Knapp, Leslie Kean and, yep, even the folk affiliated with "Coast-to-Coast AM" (when the latter isn't gushing forth all too often with pure and utter time-filling nonsense -- and, speaking of, have we mentioned former "Coast" staple Sean David Morton lately? Surely, he's missed. Well, you get the point. . .). Still, decades after UFO sightings became common fodder in the news reporting industry, UFO stories are generally given a bent of outright ridicule or implied tongue-in-cheek.

Where I live, I've encountered a few reporters from both print and electronic media whom, over the years, treated UFO witnesses and reports fairly. One -- one -- newspaper editor particularly recognized the newsworthiness of UFO incidents and printed articles regularly. Unfortunately, I've also dealt with the other kind. More recently, a TV news reporter who offered one -- just one -- well-received brief UFO feature was nonetheless instructed via the channels of upper management that UFO reports would be no more. Why? Beats the heck out of me. I've always found it peculiar that the UFO subject, unlike other topics, which generally creates an instant "draw" for any audience is, nevertheless, often condemned and prohibited by the communication powers that be. I know there are historical precursors for this, but still. . .

This attitude, thankfully, was summed up On August 16 by Bill Wickersham, writing for the Columbia Daily Tribune, when he warned:

"For the past 60-plus years, the mainstream media have either ignored or ridiculed what might be the biggest story of human history. During this period, every top-level news organization in the United States has been approached countless times by citizens and researchers with events, information and evidence relating to the UFO phenomenon. With few exceptions, the major news organizations have defaulted on this issue, including The New York Times, Los Angeles Times, Washington Post and ABC/NBC/CBS/CNN news television. On many occasions, UFO events have been reported by local media and then transmitted to narrow-minded national editors who have failed to do follow-up stories."

In my declining years (okay, just humor me, I PREFER to call them my declining years, okay?) it tickles me to the bottom of my left foot when journalists actually defy the mainstream noose, make that news, industry to tell one of those apparently forbidden, yet ultimate truths, so hats off to Mr. Wickersham and the rare who dare.

In the meantime, I'm kinda shaking my head over that boxed quote above from the late NBC-TV news anchor Chet Huntley. I ponder Mr. Huntley's potential horror in learning that his unthinkable already manifests itself in our society of "hope and change" and to the never-more- enthusiastic marriage of journalism to agenda-ridden/agenda-hidden public relations maneuvers.
Posted by Robert Barrow at 1:38 PM