Suggested TV and Radio Sponsors' Creed for the 21rst Century 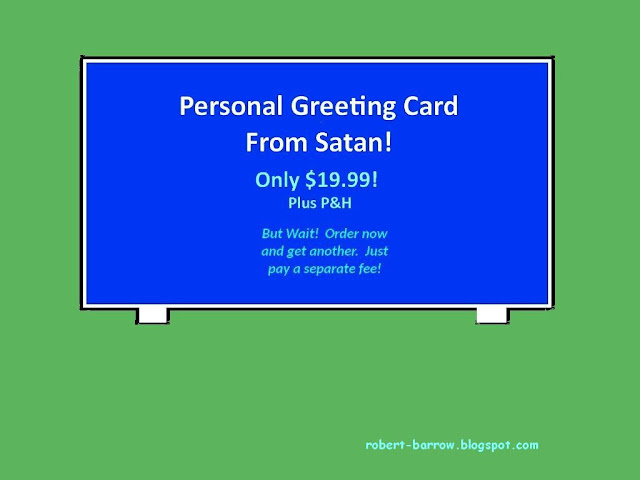 Suggested TV and Radio Sponsors' Creed for the 21rst Century


Be it resolved that we, the sponsors who financially support all television and radio networks and programs, in conjunction with official representatives of said media entities, have entered into a mutual agreement beneficial to us both, though this presents a necessary but inescapable annoyance to the TV and radio audience.  However, looking at the bigger picture in this instance, for viewers and listeners alike life sucks and you BUY.

Above all else, we strongly maintain our long-sought and now successful ability to dictate that all TV and radio programs will strive to go to commercial breaks almost simultaneously, thus precluding the audience from flipping channels with an expectation of avoiding commercials altogether, even if sampling other programs instead of commercials might show the audience that far better programs exist on competing channels.

Technology's advancements also require that traditional fade-outs between programming and commercials should not be continued, as digital electronic recording devices can easily filter out or delete sponsors' crucial messages.  Instead, we now resolve to make it impossible for viewers or devices to comprehend a pause between programs and commercial content, thereby inserting advertisements directly at the split-second where a program is interrupted.  In addition, to hold audience attention until programs resume, staff must assure that programs both old and new are tailored so that commercials begin exactly at the critical moment when something dramatic or important happens.

Regrettably, ongoing attempts to determine a method to prevent TV viewers from taking traditional "bathroom breaks" when commercials appear have not yet achieved success, but millions of dollars will continue to be budgeted annually for research into this critical dilemma.

Nor can it be emphasized enough, and this regards television specifically, when evening newscasts and other programs run commercials for pharmaceuticals, and a lengthy list of side-effects (including death) arises via narration, that viewers must simultaneously be shown pleasing, non-stressful scenes of puppies, kittens, other lovable animals, children or scenic nature settings, thereby keeping them in a serene mood and more likely to ask their physicians to prescribe the drugs colorfully and lovingly displayed on TV screens.  Particularly when death is mentioned as a possible consequence of using a pharmaceutical, this is the moment reserved for peppering viewers with the cutest images of animals or children as a distraction.

Television advertisers selling over the air are reminded to continue offering inferior or useless products for the magic sum of $19.99, a number which seems to attract and hold viewer attention no matter what, resulting in major purchases among mesmerized viewers.  Further, profits can be enhanced simply by proposing that the buyer may obtain a second item at great discount by stating, "Just pay a separate fee."

Applicable to TV and radio, but particularly to radio, extensive use must be made of attention-getters at the very beginning of commercials, options such as contrived situations with ringing phones loud enough to wake the dead, screaming kids, women's voices blaming men for every evil under the sun or, frankly, any obnoxious sound certain to capture, inform and intimidate  listeners' ears and brains for as many commercial-drenched seconds as it takes to drive the message home.

Employing such measures, it is hoped, will prevent the TV and radio audience from realizing that competitors who DO NOT advertise on these mediums may indeed provide better products or services, may have more experience with their businesses and may indeed provide blissfully less expensive services because they aren't spending significant money on commercials which consumers will end up paying for in the long term.  In fact, TV and radio possess the ability to transform even the most reprehensible and just downright rotten-to-the-core companies and individuals into something akin to saints, and for this alone broadcast networks and individual stations should be utilized for maximum public relations effects when commercialization comes into play.

If possible, without violating FCC noise rules to a significant extent, commercials for dog food, feminine hygiene products, libido enhancements, prostate drugs, jock itch and almost anything of an embarrassing sexual nature should begin with audio briefly turned up, so as to command the attention of everybody in the audience household, whether they like it or not.  This, obviously, falls under the terms of freedom of speech.

Obviously, attorney-paid commercials regarding national class-action lawsuits should scare the stuffing out of targeted TV viewers while simultaneously intimating that payoffs galore may be on the horizon.  However, care must be taken to avoid actually informing the audience that attorneys ultimately receive much of any money received through class-action  lawsuits.

Millions of dollars annually will continue to be appropriated to conduct psychological research into what makes the targeted audience purchase sponsor products.  Every option just short of drugging viewers and listeners into insensitivity remains "fair game" and, at least for the short term until 5G progenitors and various upgraded mind control choices receive wide acceptance among the blissfully unaware, influence via specific pharmaceuticals will remain on standby. Otherwise, we reserve the right to exercise our intrusive intellectual property options on a willing or unwilling public as necessary.

We take seriously our obligation to overwhelm viewer and listener senses with commercial content, perpetually driving home the point that nothing is free, and making it subliminally clear that the minds of those who engage in seeking entertainment or information via electronic media become our malleable property.

Among other imperative steps which must be taken is the obligation to make certain that for every eight minutes of programming, there should be 3-4 minutes of commercials to follow.  This can be very difficult, since editing TV shows (particularly older shows) which have already been edited, cut and spliced to pieces lose significant continuity, making viewers suspicious.

Finally, we believe that participating commercial interests carry the profoundly sacred responsibility to get "out there" and sell, sell, sell, striving always to make the hideous, absurd or substandard lovable in the public mind.
Posted by Robert Barrow at 7:23 PM