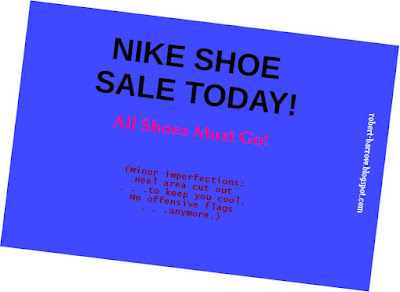 "Bait and switch" at the border:  First. we can't let this go -- and it's all about our consistently devious friends, the Democrats (a barely detectable ode of respectability once wafted from the party's structure,  more recently transformed into a radical entity interwoven with something akin to insanity).

This won't take long:  So, there's Rep. Ocasio-Cortez (though demonstrably stupido-dramatica -- and yes, I just made that up).  I think she's bucking for a Hollywood career, perhaps eventually joining with Spielberg and the Obamas to produce movies tilting further to the left than left can go) and other Dems rushing to the Southern border, all puffed up and ready for camera ops as they muster enough anger to heat up the already heated up.  As expected, they use this precious taxpayer-paid opportunity to complain about death camp conditions for the "migrants," horribly abused by vicious camp guards and scarred forever by inhumane conditions (not).  That nobody invited these thousands of border-crashers to enjoy our expensive hospitality apparently means nothing.

But the main point:  For months, maybe a year, despite every warning from the President, Republican members of Congress and border personnel themselves, concerned about caravans filled with Central Americans rushing to the border, Democrats uniformly and consistently denied a crisis in the making.  NOW the crisis is very much here, Dems are forced to admit it -- and it's Trump's fault for allowing to happen what Trump warned from day one WOULD happen!

I'm not much of an humanitarian when it comes to illegal immigrants and approaching unstoppable numbers that won't quit, but even a paramecium would have the brains to realize that this whole fetid affair (that is, a shitty mess, for those who don't know that word) is caused, owned and furthered by Democrat operatives, among them Pelosi and Schumer.

And, if these horrible abused (in Dem words) people don't like the conditions, we remind them that this isn't Nazi Germany -- they can pick up and go back without fear of mean border agents whipping them back into holding facilities.

Only the Democrats could take a problem predominantly of their own making and turn truth around to blame President Trump.  That is so wrong -- and likely wrong enough to assure Trump's victory in 2020, and during those four years we hope he and maybe additional conservative congressional reps let loose and kick progressive butt into the next solar system before the whole country is taken down by radicals.

Note, too, how Democrat presidential hopefuls are blasting Trump for the border problems, especially for the status of "the children" -- when this is all the fault of their party.  Liars and hypocrites abound on the debate stage.

Some People:  We've noted with interest the repetitive use of two joined words in recent explanations of why certain things are.  For instance, the government's refusal to incorporate a question about illegal immigrants into the 2020 census was originated because "some people" might be apprehensive about the question.  As they should be!

The other reference grew out of Nike's need to at least say something about its decision not to offer Betsy Ross flag shoes:  Nike claims it was afraid of offending "some people."

Who are these "some people?"  They aren't me, they're nobody I know, and probably a lot of people I don't know aren't "some people."  Sounds like a pretty lame defense to me, if not a an altered racist view of some kind.  Which naturally brings us to. . .

Why Colin Kaepernick is not Copernicus:  Copernicus set the stage for a revolutionary change in the way we see our solar system, basically proving that the sun, not the earth, occupied the center.  Kaepernick, on the other hand, played football.  I believe he thinks himself the center of the universe.

That's about it -- except, oh, he did wear cop-hating socks and lower himself to a knee while the National Anthem played.

Unlike Copernicus, I don't believe Kaepernick accomplished anything much besides losing a chance to play more football.  Despite every privilege and golden future option available to him, he apparently prefers to pursue the social justice game instead.

Nevertheless, he must possess a very significant role as a spokesman for Nike, even wielding the power to determine what you and I can and cannot purchase.  Amazing!  Incredible!  One man, noted for transporting a ball from here to there or making grunting noises during encounters on the football field possesses the power to ban, censor, delete and punish all because of his personal whims and fantasies of wide injustices.

I have no plantation, nor black slaves, yet I must endure a decisive product-battering from this modern-day unelected rule-maker.  All of this over a shoe, not because Kaepernick is a black social justice warrior -- but because somebody who wasn't Kaepernick invented the football long ago, and that invention catapulted this ungrateful, privileged spokesman for a huge company to a position of fascistic authority over the drooling masses.

Thank you border agents and I.C.E.!  We wish we could say your work is done, but the excruciatingly dangerous and misguided left is poised to keep you folks busy until rational thinking returns and the border bull crap is stopped.  Meanwhile, illegals are slipping in from all over the planet and of course there's no way the U.S. can remain cordial and compassionate as invading numbers rise.  And by the way, whatever happened to the useless United Nations criminals?  Isn't this pathetic international mob supposed to make everything warm and fuzzy?  We imagine they are too busy concocting ways to steal everybody's wealth in the name of climate change.  Hey, the Elite have to eat, too.
Posted by Robert Barrow at 11:20 AM