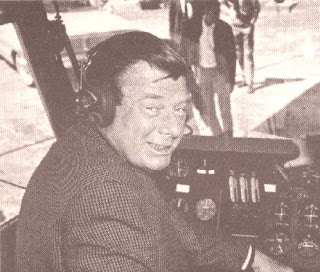 When the late "Sixty Minutes" (CBS-TV) favorite Andy Rooney (1919-2011) retired a few weeks ago, and again following his death last week, abundant mention was made of his position as a writer on Arthur Godfrey's television show in the fifties. In fact, an archived film clip of Godfrey is shown where he dryly reads a joke Rooney wrote, the setup question being, what do people on other planets eat? Answer: Venus schnitzel. Hmm.

Godfrey was portrayed as a "nasty" man off camera and sans microphone. But to my parents and grandparents (and especially to one great-aunt) he was funny, personable -- and actually hosted one of the most popular daytime shows on TV. Well, until he got into a snit one day in 1953 and fired singer Julius LaRosa on-air for all to see. That's when Godfrey realized the women in his wide TV audience madly loved LaRosa, a TV tube heartthrob of the era, and thus began Godfrey's steady ratings decline until he all but disappeared from TV. Yep, a nasty man. Kinda cheapens an old 78 r.p.m. record by Godfrey we had around the house as I was growing up. One side was his narration with music of "What is a Girl?" and the opposite side, "What is a Boy?" Of course, those cutesy/syrupy songs were recorded long before everything depended upon what the meaning of is was.

Godfrey, a colonel in the U.S. Air Force Reserve who had piloted USAF, Navy and private planes extensively, later hosted a radio show, and one day during June of 1965 Godfrey amazed his listeners with an announcement that he had experienced a dramatic UFO encounter sometime in years past. Prior to this, he had told nobody.

The incident occurred during an evening flight from NY to Washington, D.C. and accompanying Godfrey was his co-pilot, Frank Munciello. Near Philadelphia a "brilliantly lighted object" suddenly appeared near the right wing, forcing Godfrey to quickly bank left in an evasive maneuver. The FAA tower in Philadelphia reported no air traffic nearby, but Godfrey responded, "Well, there's darned well something up here."

The object soon reversed course, circled hastily around the plane and appeared off the left wing. Godfrey made a sharp turn, but the UFO followed his desperate move, and it copied every succeeding maneuver in unison. "It stayed there on the left wing, no matter what I did," Godfrey stated, admitting that he and his co-pilot were frightened.

Finally, the object took off and disappeared into the night, no doubt leaving Godfrey and his co-pilot longing for a really, really funny Venus schnitzel joke.
Posted by Robert Barrow at 5:43 PM

Unless otherwise noted, all entries are property of Robert Barrow, to be reprinted only with my permission, please. To CONTACT me via e-mail please address your note to me as follows: TYPE rob_wildwinds AND THEN TYPE @yahoo.com