How Dare You! 2020 Barges In Uninvited 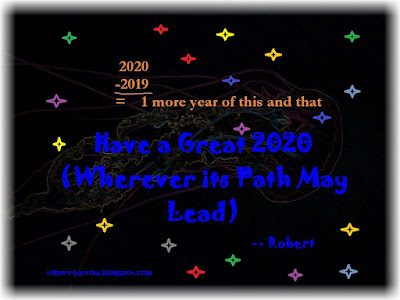 No, I couldn't stop it from arriving, but I don't really want it, either.  2020 will probably bring along another 12-month bag of trouble for the entire world, President Trump's monumental efforts of good intentions notwithstanding.

Just looking at a few topics of recent interest which I did not explore in depth, I'm already feeling  doubtful.  For instance:

Activists want to abolish honors classes for students, claiming racism and white supremacy; a school district insists upon implementing mandatory busing despite almost unanimous opposition by parents whose kids would be bused -- and immigrants from communist countries living in the community see this as one more step toward the communism they escaped.

If anybody had fun in Ukraine, it was the Obama administration, according to Ukraine officials.  And once again, a student found his graded assignment paper scribbled with anti-conservative notes and accusations of racism by his smarter-than-anybody-else teacher.

New studies indicate what everybody should have known long ago:  Computer screen time is changing children's brains, and we don't think that means for the better.  More?  It's apparently fashionable for students to boycott college English classes, calling them racist and just too darned white.

Stories of this nature are rivaled by so many others, and I ask -- if the United States hadn't been held (legally, I'll admit) hostage by the Obama folk for eight years of national weakness, would China, Russia, North Korea and Iran be so far advanced in weaponry pointed toward and intended for our direction?  We would probably learn a very, very hard lesson, but for Donald Trump.  Unfortunately, we can't negotiate through a world of monsters abroad with sprigs of niceness and pleasant diplomacy alone, which, I guess, may be some of what colleges, universities and (shudder...) high schools are providing decomposed student minds these days.