From Iran to Texas: Graduation Day 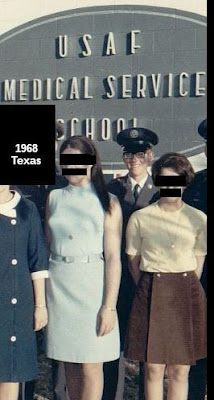 Tumultuous scenes of enraged human Iranian herds dominating TV news videos contradict everything I once experienced, albeit briefly.  Watching women covered in black like pieces of animated furniture offends the senses.  The now reminds me of the then.

The year was 1968, its final weeks winding down as we, four U.S. Air Force airmen, graduated from a physical therapy specialist course at the (then) Medical Service School at Sheppard Air Force Base in Texas.  The course, considered critical because so few were initially enrolled to cover the entire Air Force hospital system, was fairly new to the USAF, and at that time a handful of instructors only graduated a maximum of (rarely) 30 airmen a year.

But this particular graduating class was different. For the first time, as an experiment which succeeded wonderfully, the government allowed as additional students two women from a local civilian hospital -- and two young women from Iran.

Iran?  Surprised?  Don't be.  In 1968 we were on friendly terms with Iran, even training their fighter pilots and other personnel.

As you might expect, during "on hands" medical training in the classroom (as opposed to lectures and textbook teaching when we all sat together), the women worked and learned among themselves, while we four men stayed to ourselves for training in lab modalities with instructors.  The ladies from Iran were kind, eager to learn and appreciating their time in the United States.

This fleeting occasion blending together military, civilian and foreign players proved at least minimally newsworthy, as the local press provided some coverage as the event's training concluded.

True enough, Iran under the Shah back then was no paradise, but at least the people of Iran could appreciate some degree of freedom AND attire themselves in the clothing of the West -- as you can see in the photo displayed here.  I've cropped out most of the graduation day photograph because there's really no reason to include everybody, but remaining are the two Iranian ladies and, yes, that's me in the background.  I blacked out parts of their faces because that's what you do when you hope to make recognition difficult in case the wrong people are having a look, but no matter that, what I really wanted to emphasize was the clothes the young women wore back then.  No dark-side burkas to confine bodies or minds, just mix-and-match clothing of one's choice.  (I do regret that my photo edits make the women appear to resemble hostages!)

Do I know the young women's names?  Of course, but even more than 50 years later they will not appear in a blog providing easy pickings for Iranian operatives or their allies who might chance to read this blog and go looking for sacrificial lambs among the Iranian people who still pray for freedom from the radical religious dictator insane asylum running the country (for now).

So yes, there was a time when Iran was Persia, and a time when Persia became Iran and the people enjoyed wealth, beauty, an established culture and education, and then as now many of the people saw the United States in  a good way.  The older Iranian population surely remembers, though  younger people raised under the brutality and fanaticism of the current leadership have no idea.

Did President Trump do the right thing by ordering General D. Bag Soleimani and his associates obliterated?  Absolutely.  Yet one more piece of trash which rightfully should have been taken care of once and for all by the weak and obliging Obama bunch.  Any day when you can kill a known terrorist with a continuing agenda in play is a really, really good day.  Any day when you can avenge what Iranian terrorists did to your embassy in Iraq after killing and injuring more Americans is a great day.  Any day you can drive home a point to the ayatollah-mullah-imam caboose that any penchant for terror deserves a tough slap back is an exceptional day.  Any day that doesn't turn out to be Obama's, Hillary Clinton's and the Democrats' Benghazi is a good day for America.

By saying these things, I'm not waxing patriotic so much as simply being practical.

Iran?  Let's hope too many more years don't pass before the magnificence of Iran and its people can be reborn in hands other than those of religious fanatics who belong dead with brutal centuries already long forgotten by the future.
Posted by Robert Barrow at 7:05 PM